IPU New Zealand's annual staff research award was presented at the 2015 graduation ceremony at the Regent Theatre to poet and lecturer Johanna Aitchison. Johanna, an English lecturer in IPU New Zealand's degree programme, was nominated for the award by fellow lecturer Stephanie Merkens. The award, which comes with a $2,000 cash prize, recognises Johanna's extensive research activity over the past two years; in particular, the International Writing Program at Iowa University in which she participated from August to November 2015. Funded by a $20,000 grant Johanna secured from Creative New Zealand Arts, she joined novelists, playwrights, poets, and storytellers from more than 30 countries to present papers, give readings, and participate in various courses. She also found time to pursue her own writing during the two-month programme.
In addition to this, Johanna's third volume of poetry, Miss Dust, was published by Seraph Press in 2015, and has been widely and positively reviewed in top publications such as The Listener magazine, whose reviewer, Sarah Quigley, described it as "Emily Dickinson for the 21st century". She has also had her work anthologised in top publications such as Essential New Zealand Poems: Facing the Empty Page in 2014, and many poems have appeared in leading national publications such as New Zealand Books, The Listener, and literary magazine Sport. 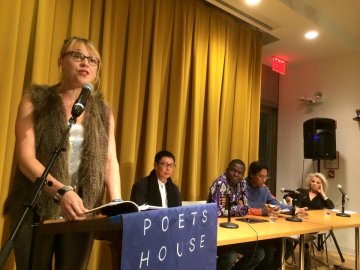