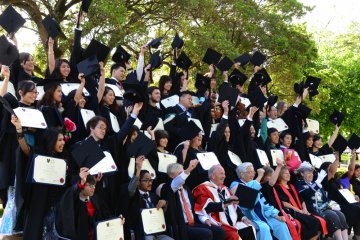 Twenty-five years ago, IPC, our name for many years, welcomed over 60 young men and women from Japan. The institute made an immediate impact on Palmerston North with this founding group of students. In a few years, students from many other countries followed. Today, the recently renamed IPU New Zealand meets the tertiary study needs of young people from some two-dozen countries. Our institution is unique as a genuinely international tertiary educational institution with a multinational and multicultural body of students and staff. Our programmes involve international issues and events, where multi-language learning (in English, Japanese or Mandarin) is the norm and where students study in small classes alongside people from other countries; where international friendships and understanding are formed in an enduring way.

This year the New Zealand Qualifications Authority reviewed many aspects of teaching and learning, and life at IPU New Zealand. Once again, we received an excellent report that indicates our top flight standing amongst the many tertiary providers outside of the university system. This is a great testament to our founding vision and to the efforts and support of staff and students, families and friends, businesses and board over the past quarter century. While the annual International Spring Festival and the Kodama Drum Team are well-known, IPU New Zealand also makes very significant contributions to the city in terms of culture, sport and economics as well as tertiary education.

At a personal level, Graduation Day is a very special occasion to celebrate your achievement and to take pride and satisfaction in reaching your goal. IPU New Zealand graduates have not only completed their qualifications but they have also succeeded in gaining an international education where people are encouraged to think globally beyond national boundaries and to see themselves as citizens of the world.

Today, you join some thousands of our graduates who have entered the workforce around the world over the years in international business, government organisations, diplomacy, NGOs, teaching, sport, environment, hospitality and tourism, to name just a few areas in which they can be found.

IPU New Zealand congratulates all our 2015 graduates and wishes them every success in their career ahead.