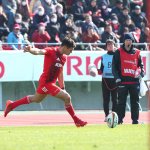 Who knew that learning a second language would lead to Joe Rush interpreting for Japanese rugby clubs, and then the All Blacks.  The IPU New Zealand graduate has done just that, and after 15 years as a translator there seems to be nothing slowing the 37-year old kiwi.

Currently Joe works as a translator for the Kobelco Steelers in Kobe, and with a raft of famous names linked to the club such as Dan Carter, Andy Ellis, Tom Franklin and Hayden Parker on the players list, and Wayne Smith on the coaching staff, the lineup is impressive.

With Japanese Top League cancelled due to Covid-19 back in February, Joe came back to New Zealand temporarily until August.  Prior to the worldwide pandemic, 2019 saw him working as a translator for the All Blacks rugby team during their Japanese World Cup campaign at press conferences as well as providing local insider knowledge.

It isn’t common to come across high profile translators in Japan who are not native Japanese, however the surprise opportunity of a high school exchange during year 10 kick started things off.  Cultural experiences have paved the way for Joe to position himself as a translator not just through language, but through cultural awareness also.  Seven years spent with the Kintetsu Liners club then saw Joe return to IPU New Zealand to work in the recruitment department, before then returning to Japan to join the Steelers club.

With the surprise upheaval of Covid-19, the IPU New Zealand graduate has made the most of his time via by an online course for the current IPU New Zealand students who are learning to become translators themselves.  A welcome return, and a great exchange of opportunities for both Joe and IPU New Zealand.

See the video below for a overview of the online course and a testimonial from one of the people who attended it.

You can also read the Manawatu Standard article here