After graduating in 2019 with a Bachelor in Contemporary International Studies majoring in Japanese Language and Culture, Max Walton was eager to go to Japan and begin his career in business. However with global pandemic threatening to put those plans on hold or cancel them altogether, nothing was certain for Max at the start of 2020. 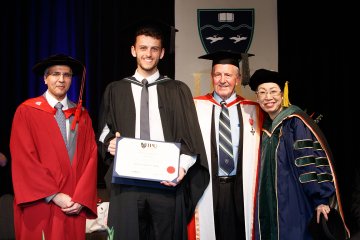 Good news came and Max was accepted as a trainee for Yunogo Bishunkaku, an Onsen Ryokan in Okayama City. After making the trip to Japan and spending the two weeks in quarantine, Max was able to attend the entrance ceremony at the Yunogo Bishunkaku in Mimasaka City along with other new employees from Washuzan Shimoden Hotel group.

"It's been tough, but the most important thing is to be able to arrive here safely and start working. I want to expand the name of Yunogo to the world." Max said in an interview with Japanese TV – KBS News.
You can watch the interview here: https://www.ksb.co.jp/sp/newsweb/detail/17007 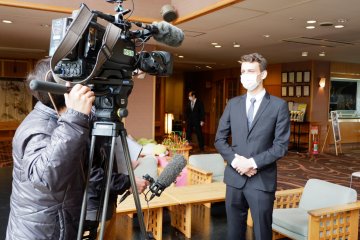 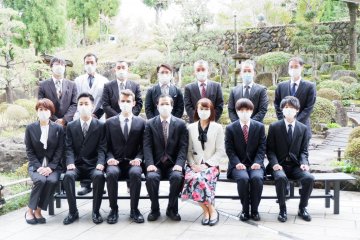 We asked Max how he managed to get a job overseas with everything that is going on. He said:
“The recent trip was planned as I had passed the interview to get the job, in my last year I talked to one of my lecturers from a Japanese paper and he put me in touch with the careers office of IPU Japan, our sister university in Japan” … “[IPU] had relationships with lots of places in Japan and found exactly what I was looking for. They arranged an interview with them and I got the job”.

So what was the interview like?
“It was pretty nerve racking! Ms Kageyama from the careers office in Japan helped me with how to put my best foot forward in the interview. The Japanese language classes I took at IPU New Zealand and the term I was able to spend studying at IPU Japan made sure I was ready to speak in natural Japanese. There was a couple of times I had to talk off the top of my head”

Leaving on the day of the lockdown must have been nerve-wracking, was your family worried?
“On the plane was pretty empty on the way over, it was just me and a bunch of people returning to Japan. My family was nervous with me going overseas at this time but knew that Japan was a safe place and that’s where I wanted to go”

What was your first impression when you got to Okayama?
“It’s really beautiful and I was actually surprised. I had looked at pictures online but they didn’t do it justice. The Sakura (cherry blossom) trees are out now so that brings a whole new dimension to the place”.

How are you finding work so far?
“I officially get welcomed into the company on the 13th so I don’t have a lot work to do until then. I have been getting to know the surrounding area. It’s not like the built up cities Japan is often known for.” … “Work I am told is quieter because of the virus, but some things are still open.”

Do you have any advice for students coming to IPU New Zealand:
“Join a club and do something fun. There’re lots of clubs; the drum team is good, there is even a tea ceremony club. Getting your degree is not just about studying it’s about taking that extra step and trying something new.”

Lastly, what was your best memory at IPU New Zealand:
“The International Spring Festival in my first year on campus. I was in the drum team and had the chance to do a performance in the festival which was great.”

Max and the other trainees with be assigned to their respective departments after undergoing a month of in-house training, this is a great first job for Max and a solid start to his career in Japan.