On 1 July 2019, Presidents of Université Libre de Bruxelles (ULB) and IPU Japan/NZ signed on a Memorandum of Understanding at the Embassy of Belgium in Tokyo, Japan.

His Excellency Mr Gunther Sleeuwagen, Ambassador Extraordinary and Plenipotentiary of Belgium, witnessed the establishment of MOU. 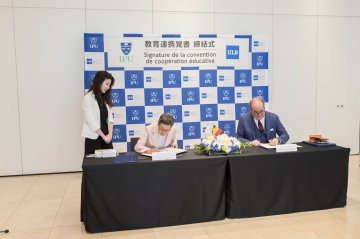 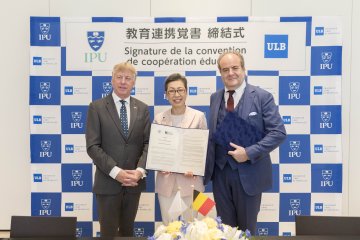 Université Libre de Bruxelles (ULB) is one of the highest ranked universities in Belgium.  Six Novel prize awardees so far have graduated from ULB.  The capital of Belgium is Bruxelles, which is known as a cosmopolitan city that accommodates the largest number of diplomats.  Belgium is located in the centre of Europe, hosting the headquarters of the European Union (EU) and the North Atlantic Treaty Organization (NATO).

ULB and IPU Japan/NZ started discussion about the establishment of MOU in October 2018.  The first educational collaboration between them will start next year in the area of Judo Therapy (Bonesetting), and PhD research activities by ULB students at IPU Japan.

New Zealand is a preferred destination for students from Belgium, and collaboration between ULB and IPU NZ is expected to follow.